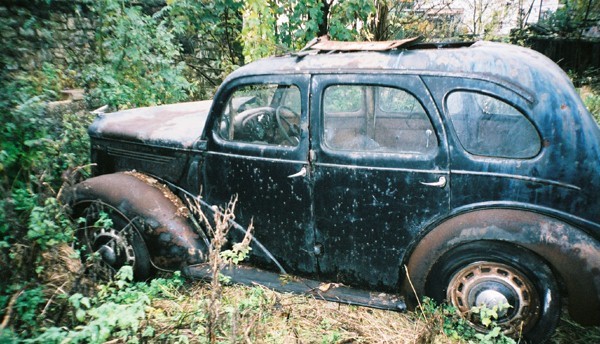 Over behind the little cottage we found this old car.

Funny, someone had used it for target practice – Stupid punks. Why would they do that?

Let’s see what it is………looks like a Prefect……English…..how did it get here? Why is it just here sinking into the sand and leaves?

You know, I remember hearing something about this when Gramps was talking to Uncle Fred a few years ago. Seems the owner was named Pappy Hall by the locals…Mr. Hall by the kids. He lived over in that little cabin and had a stash of nuts and seeds to feed the birds and some old English style candies for whenever the little kids would drop by to help feed the squirrels. Pappy was originally from England and might have been a veteran – that’s all I remember. But his family must have died- since he was always alone. Nobody ever said.

Story went that he was a retired streetcar conductor from the city with no family and not a lot of money.  I don’t think the City transit company had pensions back then. Gramps got to know him somehow and decided to help him out by giving him a small piece of property and that little cabin over there. Well Pappy Hall had this little car that he’d use to get groceries from town but his left leg was pretty lame – meaning he tended to burn out the clutch. Since he couldn’t change gears very well, he often would turn corners at speed and had rolled the car over more than once – see that dented roof and fenders on the far side? I guess sooner or later someone would come along and tip the car upright again. With no money to spare – and no local garage that knew how to fix an English car – especially and old one – Pappy just parked it. From then on, would walk to town to get his supplies. Sometimes the local farmers would give him a ride – feeling sympathy for this little old man with his lame leg. My guess is they came to know his schedule and watched out for him – made sure he had a ride. It was about 12 miles each way and must have been a pretty grim trip in bad weather. Or any time I would think – with that leg and carrying his supplies

Naturally he grew older and less mobile over the years but I don’t remember hearing what happened to him. All that’s left seems to be this old car and that little cabin. There is nobody left to ask about any more details.