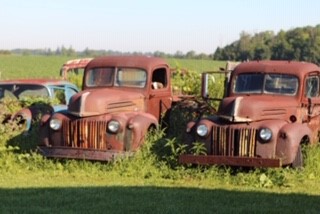 Hey you kids ! What are you doing out there?

The big voice seemed to be hollering from the upper floor in the barn……..there was an open window but no face.

The two boys froze. The shorter one said “he sounds really mad”. The taller one just nodded.

Out of the barn comes an old man in overalls and carrying the handle of an old axe.

Closer, when they could see his grey whiskers, he said “ I asked you what you are doing here? Who are you? Where are you from?”

The taller boy pointed to the two bicycles leaning on the corner of the barn. “I’m Billy and this is my brother Johnny…we’re from town….we just wanted to look at these old trucks.

“These are my trucks and I don’t let anyone touch them” he said.  “From town? “ Billy and Johnny who?”

“Farrell “, said the smaller boy. “We weren’t hurting anything”. 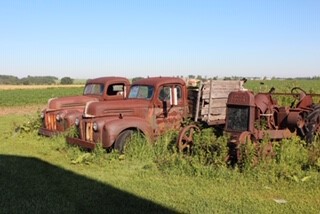 “Farrell?  Hmmm. Did your family own the general store in town? Now it’s a flower store?”

“Yes, said the taller boy. That was grandpa but he died”

The old man’s face softened a bit. “Yes I know. He was a friend of mine a few years back – actually a friend of my father’s”.

“So you boys like trucks do you? Old trucks?  I guess it won’t hurt to let you look them over. Just be careful you don’t break anything – or cut yourself on the rusty metal. That old car is mine too, plus the tractor- that was here when my father worked the farm…nothing runs anymore.”

“But I have a barn full of old cars. He points at the barn behind him … nobody lives in the farm house – I’m fixing it up. I live in that farm over there he points.

But when you’re done, come on over to the barn and I will show you some more old cars….but I don’t have all day.”