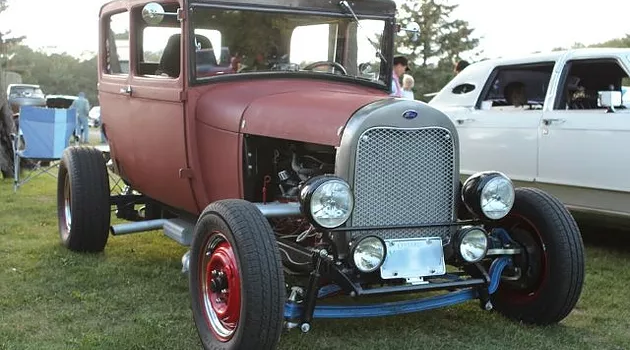 There is no question that the Ford Model A is the definition of the cars known as hot rods.

There are likely more variants of this car than any other in automotive history. In fact it is really the definition of personal transportation and thousands have been built. I even saw some in Spain and expect there are examples around the world. Usually built by individuals, you can even commission a designer-built version that will win prizes at car shows or custom shows.

The Ford Model A was the second huge success for the Ford Motor Company after the famous Model T which had been produced for 18 years. The Model A was designated a 1928 model and came in four standard colours.

Model A production ended in March 1932 after 4,858,644 units had been sold in all body styles. Next Came the Model B which had an updated 4 cylinder engine, and the Model 18 which introduced the new Ford Flathead (side valve) V8 engine.

Hot rods are almost as old as the automobile. The timeline for hot rods and custom cars starts before World War II. Teens itching to tinker with cars and go fast were racing cheap Ford Model Ts on Southern California’s dry lakes and street racing in Los Angeles even in the 1920s. The vast majority of the cars being run were four-cylinder Ford Model Ts or their successor, the four-cylinder Model A.

The early hot-rodder movement gained momentum when World War 2 veterans, still young and often trained technically in the army, needed to make a “go fast” car they could race each other with. They could pick up the basic old cars for little money (often from scrap yards). The flat head Ford or Mercury V8 was usually the base engine they modified with performance heads and extra carburetors and cut weight by eliminating fenders and chopping the roof. Later, bigger overhead valve engines like the Cadillac and Oldsmobile or Chrysler Hemi were often substituted – anything to go faster than the others!! Some very sophisticated engineering developments grew out of these cars and street racing gradually developed into NASCAR and drag strips. A whole industry developed to supply performance equipment demanded by the hot rod community. 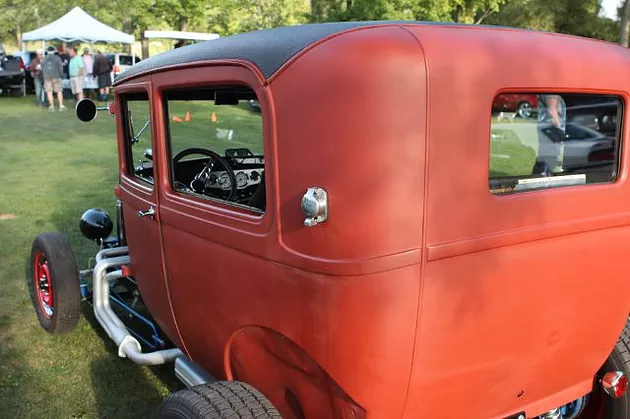 This ’29 Model A Tudor was built in the tradition of the original hot-rodder’s.  Rick Guy and his best buddy started his personal version of a hot rod when he was 15 and still in high school and he had a pretty good idea of what he wanted. However the project stalled out and the first attempt is resting in his buddy’s barn to this day.

Later, only a few years ago, Rick’s son, now an adult himself, figured it was time for his dad to get back at it and build his dream car – if not now than never.

He sensed his dad’s hesitation but went ahead and found the right body and some key parts in the Michigan Auto Trader magazine. He dragged Rick over to look at it and convinced him to make the offer – then they arranged to trailer it home to Canada. With the old hulk on the trailer, Rick says the Customs officials at the border looked closer at the tow vehicle than the old Ford out behind.

Rick thought about building his car for so long, he had a pretty good idea of what he wanted. Dad and son moved it into Rick’s shop at home and he began to redo all the welds. The original gas tank was in the cowl in front of the windshield and it was full of walnuts. That section was removed and a new tank fabricated for the location in the rear. Rick fabricated a new firewall. The engine is the 350 small block from Chevy and he chose the 4 barrel carburetor on the Edelbrock Performance intake manifold. The headers are from Speedway and he made the balance of the exhaust system himself. His transmission is the GM 700R4 – a four speed automatic with a 30 % overdrive in 4th gear. His rear end of choice is the 7.5 inch Ford. 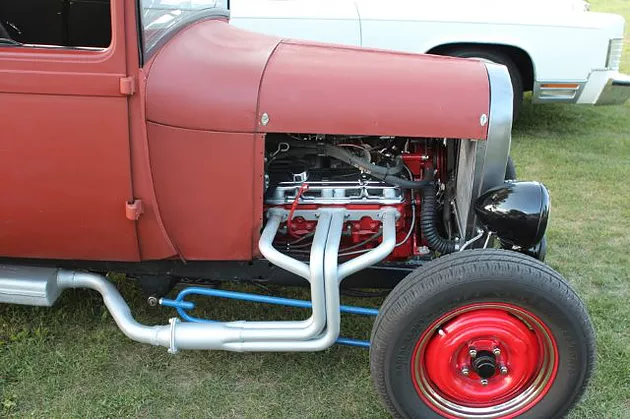 Almost all hot rods have different wheels front and rear to lower the front end – referred to as “rake”. This lowers the front end and reduces weight while the bigger rear tires increase traction on hard acceleration. Rick uses 15”X4” Volvo front rims and 15”X 6.5 Ford rims on the rear. Rick also knows his old Volvos and knows that certain Ford and Volvo rims use the same bolt patterns.

The interior design is Ricks also. One neat old time feature he retained is the dash mounted convex mirror that lets the driver monitor overhead traffic lights without having to bend over to look up through the shortened vertical windshield with the visor. 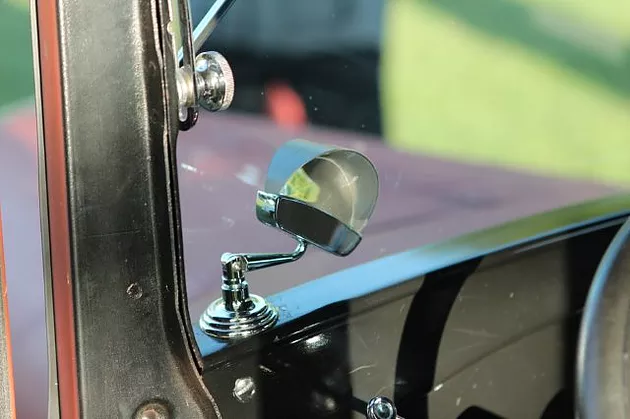 Every time I see Rick with his ’29, he has a big grin – finally he has his hot rod – made it himself – and I wish I had his talent.

Now he is building a matching trailer to be to ready haul his stuff while out summer cruising.