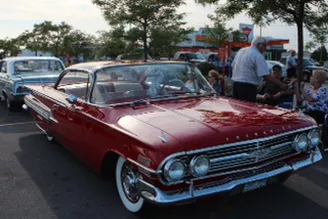 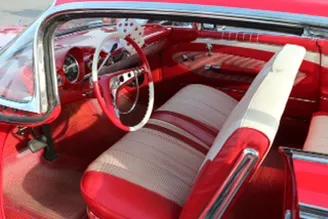 Harvey Eckmier was trying to find a 1959 Chevrolet back in 1991. In London, Ontario there was an antique car dealer on Warncliffe Road and this car was for sale there. It had been imported from Nashville. Even though it wasn’t Harvey’s preferred colour, it had the required low mileage and great condition as most cars from “No-Salt-States” tend to be. Harvey bought it and in March 1993 it was time to get it into the body shop so the restoration could begin. Harvey’s brother-in-law is Ron Box – a well known high end restoration master craftsman who has restored and customized countless other outstanding cars. Naturally, Ron was in charge of this project. Harvey points out that this car was restored 25 years ago (and counting) -but it looks like it was just finished yesterday!!

Since the restoration this Impala Sports Coupe has been driven over 60,000 miles (100,000 kilometers) and currently sits at 107,000 miles (172,000 kilometers)! It has won over 160 awards including “Best Interior” over at the annual car show in Michigan at the Henry Ford Museum. The rules said he had to split the title with another car otherwise this amazing Impala would have won “Best Exterior” as well! 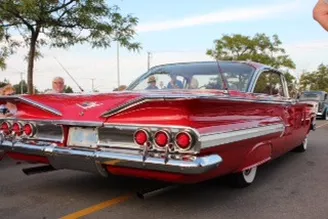 In the 60,000 miles since restoration Harvey has driven to many places in Canada and the United

States and truly enjoys the Impala’s terrific highway ride. With the stock 283 cubic inch engine and the two barrel carburetor, the fuel economy is pretty good and the power is of course just the way the car came from the factory. The view from the rear corner really highlights the car’s lines which gives a sense of the sculptured look from that era – the jet plane stainless steel image on the fender trim, the flattened fins as the finned era was moving on and the famous “bubble-top” roof line with the huge expanse of glass!

This car brings back memories of days when 6 full size adults with their luggage could fit into one car!! 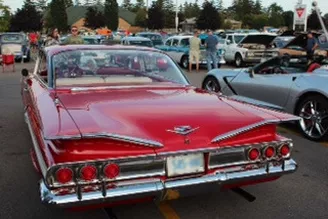 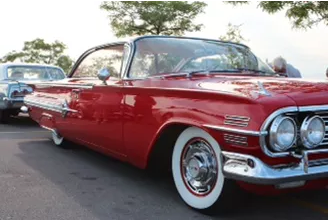