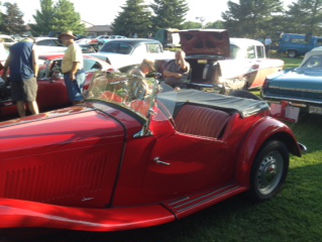 Richard Skidmore has owned this car since 1978. He tells me it took him 25 years to get it. He was about 17 and hitchhiking to school when he was given a ride in an MG TD. The memory of that car never left him and he was determined to have his own someday.

The MG T series is a range of body-on-frame open 2-seater sports cars with very little weather protection. They were produced by MG from 1936 to 1955. The series included the MG TA, MG TB, MG TC, MG TD, and MG TF Midget models. The last of these models, the TF, was replaced by the MGA. Nearly 30,000 TDs had been produced when the series ended in 1953 with all but 1656 exported, 23,488 of them to the United States (US) alone. The main complaint that US owners had with the MG TD sold in the US was the British 12-volt electrical system, which was hard to service when most US cars were still using 6 volts. Also, they had minor complaints over the lack of water temperature and fuel gauges. But in general in surveys, owners of the Americanized MG TD had more positive remarks than negative. 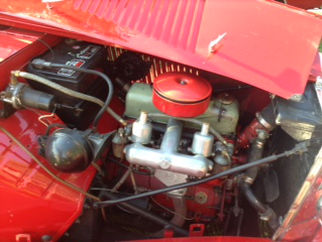 This is a beautiful running MG TD and has the standard twin SU carburetors. Richard says he can balance the SUs himself – although he and I agree, it isn’t all that easy to do. This engine ticks over quietly at idle – very smooth.

When I was asking about the engine cooling system, Richard showed me the red vanes inside the radiator shell and pointed out they can be set (like aircraft wings) to direct air past the radiator core to maximize cooling. Such a simple idea to help the fan keep things cool. These MGs are simple mechanically and Richard pointed out how he jacked the car up at home and did his own front end alignment without a fancy alignment machine. I didn’t see any tire wear! 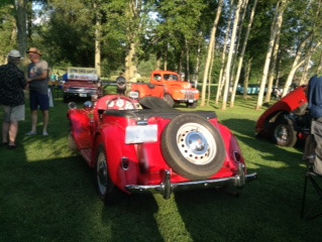 The MG was located at an RV dealer in the Hamilton Ontario area where it had been part of a trade-in on a motor home. Seems like one extreme to another? Since Richard bought it, he rebuilt the 1250 cc engine and generally drove it and fixed it as necessary for 18 years or so.  Then in 1995 did a cosmetic restoration. 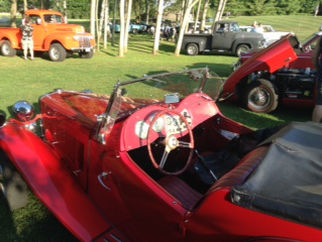